This system is technically unlimited: it can support any object type, any number of object, spawn condition or spawn location… but for now it is very limited. If you need an extra feature, please request it instead of making your own system.

Spawning a Single Object at a Specific Location.

You can control when the objects will spawn with the following variables:

For example, with the following variables: 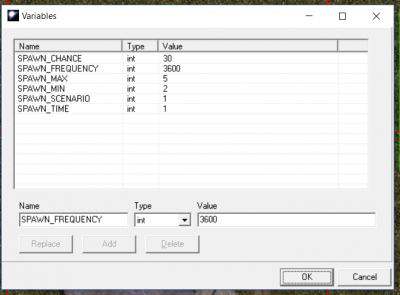 Objects will only have 30% of chance to spawn (0 or between 2 and 5 objects), during the day, if the area has the SPAWN_SCENARIO variable set to 1 and if the objects didn't spawn in the last hour.