Personal homes in Sinfar are largely restricted in their function and capability by the limited selection of home scripts available. By becoming a Sinfar Supporter, additional options open up.

A Sinfar supporter will get access to their own resources page, each resource made up of the following elements: 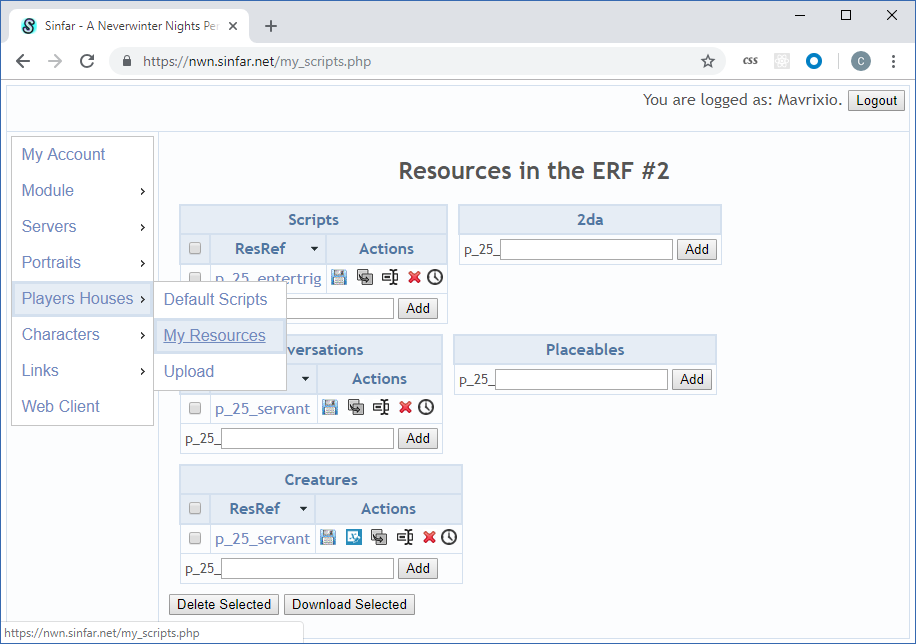 As you can see, nearly all of the main features of the toolset become available to a Sinfar supporter, however each one has some restrictions and some extra requirements before they can be made usable. Additionally there are some tricks for making NPC behaviours work found here.

It is now possible for anyone to make their own scripts and other blueprints for inside their house.

Basically everything is in place so that “players scripts” can be ran safely: any NWScript function that could be use to cheat has been modified. For example: - No item object can be created/manipulated - Effects applied to PCs are temporary (removed when leaving the house) - Player House items are removed when leaving the house - Impossible to Give/Take XP/Gold. - You can't access objects that are outside your house … It is a work in progress but I started by disabling everything so now it is a matter of re-enabling the functions that could be useful and safe in a certain way.

There will of course always be a risk, mainly for the server stability so this feature will only be for “Sinfar Supporters” and selected players. Those players will be able to use any script blueprint that starts by “p_”, in their house and make those scripts.

The forums have some examples but see the links above for additional details. The key emphasis that makes it all work though, is the tagging system. Pay attention to tags used and work primarily with the tags created on the website resource page, and things will work better.

Other articles in this section of the wiki assume a base familiarity with the Toolset and it's features from this point forward. Be advised that there are no tutorials here for making characters, or scripts, or conversations, For those tasks, see other resources including the Neverwinter Vault, etc.