You can download the win32 client of that specific build here: https://nwn.sinfar.net/files/sinfarx/8181/win32_8181.zip

The latest update of EE broke character creation on Sinfar. You can revert to older versions. Unfortunately, it seems that transferring a character to a non-existing account is not possible. If you've previously successfully logged in (such as on a Diamond client), getting someone to transfer a character to you should be no problem, but for completely new players, look to the bottom.

Here's what you should get:

As you can see, it includes SinfarX so to launch the game, run sinfarx_ee.exe

Getting necessary override: Due to changes to EE models, users of the client can't load into Sinfar and need a few override files. These should be put into the ovr folder of the win32_8181 folder from the SinfarxEE download above: 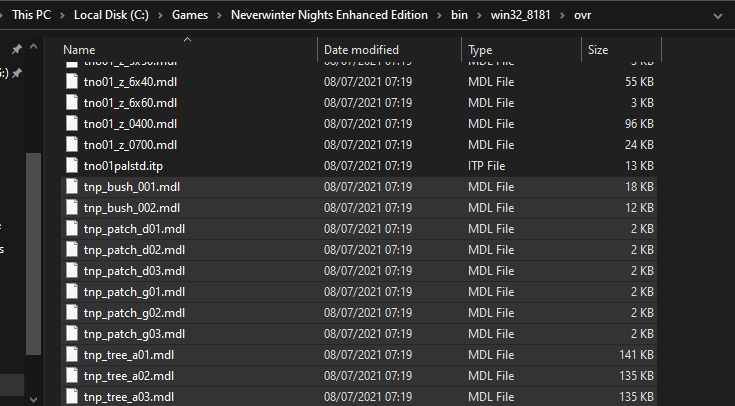 Sinfar is a Diamond Edition server natively, meaning that there can be some issues with playing with the Enhanced Edition of NWN. Currently, making a new character with EE is simply not possible and you'll crash before you can finish. Instead, it's recommended to make your characters by installing NWN Diamond Edition, which can be found here: NWNDiamondData.exe
After character creation, you can safely go back to using EE to play. (Note: Some high-level dungeons has a lot of visual effects that can cause a lot of crashes on EE, so anyone wishing to participate in those is recommended to use Diamond as well.)

You'll still need to install the haks (below), but you don't need two copies of those - in the nwn.ini you can specify a path for each version to look for haks under [Alias] at the top (for EE, nwn.ini is located in your documents/Neverwinter Nights and for Diamond, it's located in the game's install directory). You need to specify a path, for example:

You can download the haks manually: sinfar_all_files_v30.7z and extract them in your “C:\Users\username\Documents\Neverwinter Nights” folder.
And here's more download options: https://sinfar.net/haks

Done! Go back to the How to Play page.